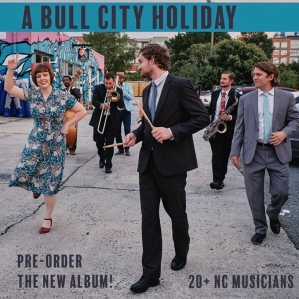 Keenan McKenzie has assembled over 20 North Carolina-based musicians (including yours truly) to appear on his album of original holiday swing tunes written by the maestro himself.  I had the honor of providing vocals for Keenan’s debut album of original music, Forged in Rhythm, and I’m excited to be working with him again on new material for dancers and also to be working with some of my favorite local musicians.  We’ll be recording at Overdub Lane in August, 2019 with ensembles ranging from small group swing to big band.

As with any recording project, nothing is free, but Keenan’s crunched the numbers and launched a reasonable Kickstarter campaign – only $5,500 – which I like to think of as pre-sales for an album you’ll want to buy anyway.  Keenan’s also got some great rewards, like private lessons or him transcribing a big band arrangement of your choice that will debut at Lindy Focus this year!  Don’t tarry, the campaign is only up until August 21.