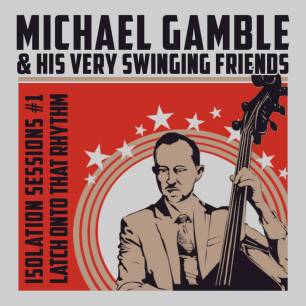 The links below are either for Bandcamp or iTunes, but you can also purchase almost all of these albums on Amazon, Spotify, and just about anywhere digital music is sold.

Remote Riffing: Volume 1 is an EP featuring remote recordings of Keenan McKenzie‘s original swing music recorded during the COVID-19 pandemic, featuring a lineup of musicians from across the US and including two new original tunes written and recorded during the pandemic.  Singing on 3 tracks, released October 18, 2020.

Michael Gamble and his Very Swinging Friends is an offshoot and COVID-19 pandemic project of Michael Gamble and the Rhythm Serenaders, featuring a different lineup of incredible musicians on each of four EPs, recorded remotely during the pandemic.

Rhythm Relief: The Swingtacular Show EP – the music from Rhythm Relief: The Swingtacular Show, a virtual show to raise money for full-time swing instructors and musicians affected by COVID-19, was so popular that people wanted to own it, so now it’s a digital EP.  Proceeds continue to go to COVID-19 relief through the Pacific Swing Dance Foundation.  Singing on two tracks, released on June 3, 2020.  Only available on the PSDF website.

Tribute to Louis Armstrong & His All-Stars / Live at Lindy Focus – Gordon Au led a tribute to the Louis Armstrong All-Stars at Lindy Focus XVIII and put together this album of recordings from that performance during the pandemic to help raise funds for the musicians on the album who rely on music income to meet their needs and have had their events and gigs canceled.  Singing on 9 tracks, released on April 15, 2020.

A Bull City Holiday – Keenan McKenzie‘s album of original holiday swing music with a cast of 30 Triangle musicians contributing their talents to the album.  Singing on 4 tracks, released in November, 2019.

Forged in Rhythm – Keenan McKenzie‘s album of original swing music.  If you like the original tunes on the Mint Julep Jazz Band albums, Keenan is the mastermind behind these tunes.  Singing on 7 tracks, released in December, 2017.

Get Rhythm in Your Feet – the second release from Michael Gamble and the Rhythm Serenaders, singing on six tracks. Released in July, 2017.

That New Old Sound: Vintage Jazz From a New Generation of Bands – a compilation album of modern-day swing and early jazz bands, spearheaded and organized by Glenn Crytzer, featuring the Mint Julep Jazz Band‘s “The Dwindling Light By the Sea,” with all the proceeds of this album going to the American Civil Liberties Union (ACLU).  Released in December, 2016.

Carolina Tiger Milk – Peter Lamb and the Wolves‘ third album, singing on “I’m Evil,” along with fellow Mint Julep Jazz Band leader Lucian Cobb on trombone as musical guests of the Wolves for this track, released in September, 2016.

Michael Gamble and the Rhythm Serenaders – self-titled debut album, singing on 4 tracks (or 5 if you download from iTunes and get the bonus tracks), released in August, 2016.

Have a Holly Raleigh Kidsmas – singing background vocals on the Atomic Rhythm All-Stars‘ original tune “Our Friend the Gingerbread Man,” released in 2009.