I’ve probably lost my mind, but I am beyond excited about the events coming in August and early September! The first two are for fun and the last four are gigs, which also happen to be fun – I love that singing has afforded me such great travel opportunities this year, performing with several different bands! Here’s where I’ll be, barring forces majeure:

August 8-10, 2014 – competing and social dancing at the Southeast Summer Brawl in Columbia, SC

August 16-17, 2014 – immersing myself in a 1920’s alternate universe and dancing like a mad flapper at the Jazz Age Lawn Party in New York City

August 21-24, 2014 – I’ll be pulling double duty at the International Lindy Hop Championships in Arlington, VA, DJ’ing and singing with the Jonathan Stout Orchestra and Jonathan Stout and his Campus Five!

September 12-13, 2014 – I’m back with Jonathan Stout and his Campus Five for the Knoxville Lindy Exchange!

So many exclamation points!!! Six states in six weekends – see you on the road! 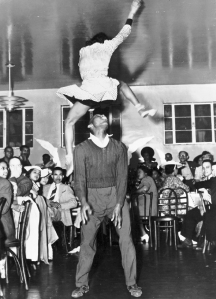 The Mint Julep Jazz Band is proud to be performing at Frankie 100 NC, North Carolina’s Frankie Manning Centennial Celebration, a once ever event celebrating the life and legacy of Lindy Hop pioneer, educator, and global ambassador Frankie Manning, who passed away shortly before his 95th birthday. This year Frankie would have been 100 years old and the global Lindy Hop community is set to celebrate, with a huge event in New York, Frankie’s hometown, and smaller celebrations worldwide.

The Mint Julep Jazz Band will be performing at the main dance on Saturday, May 24, 2014 at the Carrboro Century Center from 8:00 p.m. to 11:00 p.m. Come join us for some Lindy Hop and be a part of this celebration for NC, which is drawing dancers from surrounding states and beyond!