It’s a busy week for RDU Rent Party as we play host two two music events – first, on Thursday, January 26, 2012, Jessy Carolina and the Hot Mess return to North Carolina for a dance at Hot Club of Durham’s weekly Lindy Hop and swing night. This 5 piece New York based hot jazz band is full of energy and Jessy belts it out like no other.

Beginner Lesson at 8:00 p.m. with Adam Speen and Abigail Browning (who will be teaching a Dean Collins and Jewel McGowan class series for Hot Club in February – check it out! http://hotclubofdurham.com/2011/12/intermediate-lesson-dance-like-dean-and-shine-like-jewel/)

Admission is pay-what-you-can with a $10 suggested donation, with all donations going to the band.

Second, RDU Rent Party welcomes back th’ Bullfrog Willard McGhee and Tad Walters for a very special edition of Rent Party, where all the proceeds of this dance will go to the Floyd Council Memorial Project. Floyd Council was a Piedmont Blues guitarist and singer who began playing in Chapel Hill in the 1920’s and rose to prominence in the 1930’s when he recorded with blues musician Bind Boy Fuller. His influence is widespread, including serving as inspiration and partial namesake of the band Pink Floyd. Floyd Council presently lies in an unmarked grave in the White Oak A.M.E. church cemetery in Sanford, North Carolina. The goal of the Floyd Council Memorial Project is to raise funding in order to:

Come out and support th’ Bullfrog’s efforts to promote North Carolina’s blues music heritage and honor one of its most prominent musicians. It will be a night of blues that will make you sway and keep your toes tapping, at any tempo!

As always, Rent Party is pay what you can with a suggested $10 minimum donation to the band

This weekend, November 3-6, is the Eastern Balboa Championships, the epic Balboa workshop and competition weekend that takes place in Raleigh, NC every year. I’m pleased to be a part of the DJ roster again this year, along with head DJ Kyle Smith, DJ Kristy Milliken, and DJ Abigail Browning. I am also excited to be a featured vocalist with Russ Wilson’s Nouveau-Passe Orchestra on Saturday night.

On Saturday, I have made arrangements with the Raleigh Vintage Collective to have a trunk show at EBC from 9:00 a.m. to 9:00 p.m. that will feature clothing and accessories for men and women from the 1920’s, 1930’s, 1940’s, and 1950’s. This is an exciting prospect because everything offered will be era-appropriate for swing dancing! Lindy Shopper will be reporting, of course.

I’m excited to be DJ’ing for the Hot Club of Durham swing dance again this week! Come swing out at Durham’s weekly Lindy Hop, East Coast Swing, Charleston, and Balboa night and enjoy the new swing and early jazz tunes I have ready to play for you. 🙂

Beginner lesson at 8:00 p.m., dance from 9:00 p.m. to 12:00 a.m. Come early and grab dinner at one of the food trucks parked across the street at Fullsteam Brewery or Motorco. 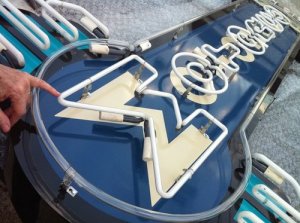 The Atomic Rhythm All-Stars return to the stage at Durham’s Motorco Music Hall, located in the thriving Central Park District near Fullsteam Brewery and Geer Street Garden, and is the unofficial food truck Mecca of Durham. Spend your Labor Day Saturday night at this great concert venue and bar, with live hot jazz and delicious food you can bring into the building. The show runs from 8:00 p.m. to 11 p.m. and the cover is $10.00 – I’ll let you know as soon as I know!

Watch the Atomic Rhythm All-Stars make their documentary debut in this Triangle, NC based television show highlighting the music scene and various musicians in the area, with all episodes available online. We are featured in the first half of Episode 4 – available at http://soundsituations.com/eps/4/

Episode 04 of Sound Situations featuring Birds and Arrows and the Atomic Rhythm All-Stars is set to air Thursday and Saturday at 6pm on Channel 10 of Raleigh Television Network! Web episode hits next week at http://www.soundsituations.com. We are excited to be featured on this fantastic documentary television show that highlights the music scene in the Triangle area of North Carolina. Stay tuned!