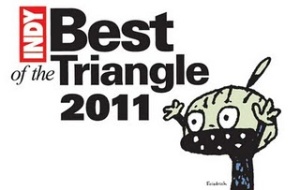 Due to a typo naming the band “Atomic Heaters,” recognition was delayed, but we’re excited to announce that they discovered the mistake and the Atomic Rhythm All-Stars was a finalist for the Best Jazz Group in the Triangle in the Independent Weekly’s Best of the Triangle 2011! The title of Best Jazz Group went to Atomic’s saxophone player’s band, Peter Lamb and the Wolves, so there are winners all around! Thanks to everyone who voted in the reader’s choice poll for both of these groups without being prompted or choosing from a list!