I occasionally get asked the question, “How did you start swing dancing? What’s your story?” Everyone has a story about how they came to this subculture and, if you’ve been dancing for over a decade, that story must be like ancient history to the new generation of dancers. Prompted by both the Wandering and Pondering and ‘Taint What You Do blogs, I’ve put my story into words. 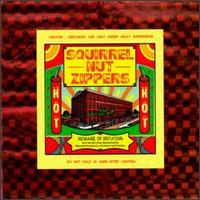 My story begins with a love affair with jazz music. In 1996/1997 I was in the 10th grade at Davie County High School, the only high school in a very rural North Carolina county. I was heavily influenced by the music on an alternative rock radio station based out of Winston-Salem, NC, but I can’t remember the call letters and I’m not sure they even exist anymore. I would listen to their music getting ready for school in the morning and it was through this radio station that I was exposed to North Carolina’s own Squirrel Nut Zippers. I loved the sound, bought the CD, immersed myself in it, and shared it with others. I developed a curiosity for this music and began to seek out other artists in this vein, but this was before widespread internet use so my resources were limited. At the end of 11th grade I did a project for my U.S. History class on my grandfather’s adventures as a Merchant Mariner during WWII and used SNZ’s “Good Enough for Grandad” as the background music for my video montage of photos. My grandfather would frequently talk about jazz and musicians from the 1930’s and 1940’s, as well as play music from this era on his turntables, and I slowly began putting all the pieces together in a historical context, where SNZ got their inspiration. This was just before all hell broke loose.

I remember riding around the next summer in my 1990 Honda Civic DX with my best friend Caroline, squealing whenever we heard the Brian Setzer Orchestra or Cherry Poppin’ Daddies on the radio – “Turn it up! We have to get this CD!” Somewhere in this time frame of 1998, the GAP debuted its “Khakis Swing” commercial and I was completely smitten, bitten, and infected with the jitterbug. There was a dance I could learn that went with all this great music? I had to do it, right then. But how? I was 17, living in rural North Carolina with overprotective parents, where was I going to find someone to teach me?

The ever resourceful Caroline had the idea that we would host our own swing dance at our high school. After a little digging, we discovered that we could use the gym after a football game for about an hour and that the high school band director did ballroom dancing with his wife and would be willing to teach an East Coast Swing lesson. We befriended the A/V guys who put together mini-commercials for the dance that aired during morning announcements, using dance clips from A League of Their Own and Swingers. I put together a set of my swing music (my first DJ gig!) and with a boom box we were set. Caroline and I donned our GAP khakis, took the basic lesson, did dangerous aerials with our friends, and left with a feeling of accomplishment – we learned how to swing dance! 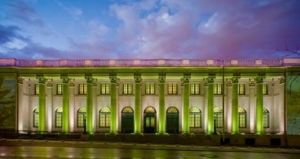 I forget how the word trickled down to me, but a few weeks later I learned that the Millennium Center in Winston-Salem had swing dances. I rounded up a group of my friends to head into “the city” to attend a Supermurgatroid Productions dance at this wonderful venue, an old post office converted into an event space with miles of wood floors. I took another beginner lesson, this time with Joel Domoe and Salima Owen, and I was bursting with excitement. I’d get to dance with REAL swing dancers, not just the boys at my high school. I was in heaven. After the lesson, my friends were not as into it as I was and I remember leaving the dance earlier than I wanted, but I did manage to sneak in a few dances with more experienced dancers.

I continued to watch the swing craze play itself out over television, catching broadcasts of the Brian Setzer Orchestra and other neo-swing bands that may have appeared on shows (see video above from 1998 MTV Music Awards, dancers enter around 5:20 – do you know any of the dancers? Do they still dance?) and on late night TV. I remember seeing dancers in these productions, with brightly colored outfits, flipping and turning with gusto. I remember reading articles about the swing dance and vintage culture in Los Angeles, California, seeing photographs of men in zoot suits or three piece suits and women in beautiful vintage dresses and accessories. I watched Swing Kids and started collecting a few traditional swing and jazz CDs, in addition to neo-swing.

I didn’t return to swing dancing until after golf season and a bout with mono, but as I headed to my freshman year of college at East Carolina University, I sought out swing dance lessons on campus and discovered that the campus Methodist minister taught weekly lessons at the Methodist student center. The response for these lessons was overwhelming and we all packed into the tiny auditorium at the student center to get our weekly dose of East Coast Swing. There were only a handful of actual social dances at the student center, in spite of the amazing turnout, and some of us wanted more. Two Air Force pilots from Seymour Johnson AFB in Goldsboro who commuted to the weekly swing dance lessons at ECU told some of the dancers about a weekly dance in Raleigh they had been commuting to, where all the best dancers in the state would come and dance every week. It was at a place called The Warehouse. I’d only been to Raleigh a handful of times in my life and I was dying to see people dance like the GAP ads. I was in.

Lindy Shopper storytelling shopping detour: I couldn’t show up to a big dance in Raleigh wearing just anything, especially after seeing the L.A. women in their beautiful dresses. Surely, the sophisticated dancers in Raleigh would all be wearing vintage! On a trip home to visit my parents, my mother took me to Winston-Salem to a vintage store called, I believe, Hello Betty. I had no idea what to look for, but my mother did, thanks to her sewing experience, her penchant for historical costumes, and her childhood during the 1950’s. Looking back, we actually found two really great dresses – the first was a pale pink late 1940’s rayon dress with mother of pearl buttons on the the bodice and black stitching detail (lost to moths a few years ago, tears ensued); the second was an early 1960’s black cocktail dress from Montaldo’s, which we later discovered (after ripping out the lining to tailor the dress) was a Ferdinando Sarmi design.

When we made it to the Warehouse, late on a school night, I was overwhelmed by what I saw. It wasn’t the GAP ad, but, in my opinion at the time, it was real swing dancing. Being around these dancers was intimidating, but I couldn’t keep my eyes off the dance floor. I danced with the guys who came with us and maybe one other person, but kept to the side of the dance floor. I think one person commented on my vintage dress. I was the only person wearing vintage and stuck out like a sore thumb. Some things never change around here. 😉 I went to the Warehouse one other time before the flyboys were transferred to another Air Force base. 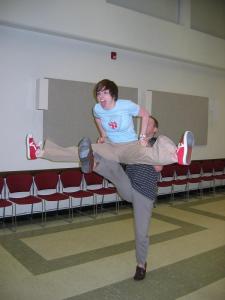 Guzzo and I at our GAP khakis best

During the second semester of my sophomore year of college, the campus Methodist minister started teaching us Lindy Hop, based on the Frankie Manning videos. A small group of us struggled to get the steps right, and it slowly began to make sense. At the end of the semester the minister sat us down and told us he had taught us everything he knew and that he wouldn’t be able to teach next year because of his duties. Would a couple of us be willing to take over the lessons? Somehow, the torch was handed to me and my dorm-mate of the past two years, Mike Guzzo, to take over the East Coast Swing lessons.

Mike and I started the semester with that same packed auditorium, but by the end of the semester it had dwindled down to a core group that would eventually become the ECU Swing Dance Club. It was about this time that I met Dave Fillmore at a local dance, who had a profound influence on my Lindy Hop. Dave spent a few months out of every year living in San Francisco, dancing and taking lessons from Paul Overton and Sharon Ashe (who, ironically, now live in the same town as I do). Dave took me under his wing, taught me some proper technique, turned me on to what the national DJs were playing at the time, and, most importantly, got me traveling to dance. We would ride together to the weekly dances in Raleigh, which had moved to a restaurant/brewery called Greenshields, and I slowly overcame my awe of the dancing there and joined in. We’d commute to the Triangle Swing Dance Society dances at the Durham Armory. In 2003, I attended my first Lindy exchange, DCLX. The rest, as they say, is history. In 2005, I moved from Greenville to the Triangle and I’ve been an active member of the swing dance community here for years and continue to travel to swing dance events all over the United States. 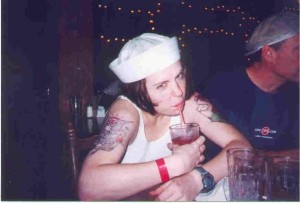 An early photo, with Dave Fillmore at right, from the rained out U.S.S. North Carolina swing dance in Wilmington, circa 2001/2002. Sharpie tattoos courtesy of my neighbors, Cape Fear Tattoo.